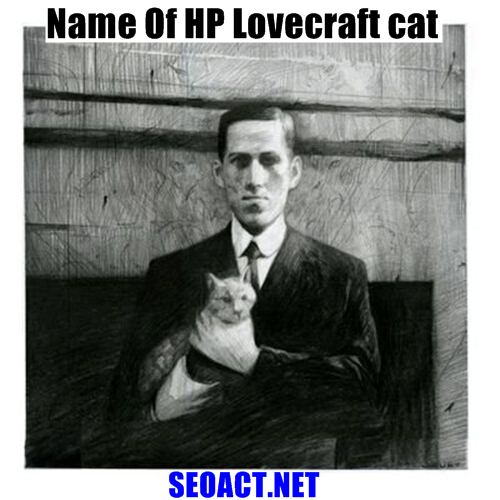 Howard Phillips Lovecraft was an American writer of weird and horror fiction, who is known for his creation of what became the Cthulhu Mythos.

Born in Providence, Rhode Island, Lovecraft spent most of his life in New England. He was born into affluence, but his family’s wealth dissipated soon after the death of his grandfather.

In 1913, he wrote a critical letter to a pulp magazine that ultimately led to his involvement in pulp fiction.

During the interwar period, he wrote and published stories that focused on his interpretation of humanity’s place in the universe. In his view, humanity was an unimportant part of an uncaring cosmos that could be swept away at any moment.

These stories also included fantastic elements that represented the perceived fragility of anthropocentrism.

Just so you know, Lovecraft was a very racist man. Now, Lovecraft did not hold all white people in uniform high regard, but rather esteemed the English people and those of English descent.

He praised non-WASP groups (White Anglo Saxon Protestants) such as Hispanics and Jews; however his private writings on groups such as Irish Catholics, German immigrants and African-Americans were consistently negative. Just some food for thought.

The name of the cat, “Nigger Man”, has often been cited in discussions of Lovecraft’s racial attitude. Lovecraft owned a cat by that name until 1904. The cat had likely been given its name when Lovecraft was about age 9.

How was H. P. Lovecraft racist?

Among other things, he once wrote in an early poem titled “On the Creation of Niggers”:

“A beast they wrought, in semi-human figure/ Filled it with vice, and called the thing a Nigger.” Sounds pretty terrible, regardless of the context “of the time”.

There is no serious dispute in literary or historical circles that Lovecraft was personally a rather ardent racist, even given standards of the time. Wikipedia explains it pretty well, too (emphasis mine):

Race is the most controversial aspect of Lovecraft’s legacy, expressed in many disparaging remarks against the various non-Anglo-Saxon races and cultures in his work. As he grew older, his original Anglo-Saxon racial worldview softened into a classism or elitism which regarded the superior race to include all those self-ennobled through high culture.

From the start, Lovecraft did not hold all white people in uniform high regard, but rather esteemed the English people and those of English descent. He praised non-WASP groups such as Hispanics and Jews; however his private writings on groups such as Irish Catholics, German immigrants and African-Americans were consistently negative.

In an early poem, the 1912 On the Creation of Niggers, Lovecraft describes black people not as human but “beasts… in semi-human figure, filled it with vice”. In his early published essays, private letters and personal utterances, he argued for a strong color line to preserve race and culture. He made these arguments by direct disparagement of various races in his journalism and letters, and perhaps allegorically in his fiction concerning non-human races.

Some have interpreted his racial attitude as being more cultural than brutally biological: Lovecraft showed sympathy to those who adopted Western culture, even to the extent of marrying a Jewish woman whom he viewed as “well assimilated”. While Lovecraft’s racial attitude has been seen as directly influenced by the society of his day, especially the New England society he grew up in, his racism appeared stronger than the general popular viewpoint.

Why is H.P Lovecraft considered a poor writer?

Lovecraft is a polarizing writer – many people will defend his writing to the end, while others do “consider him a poor writer.” Most of the criticism that’s been levied against him comes in two forms.

The first has to do with his style, which is dense, complex, and verbose; his prose is often described as “over-written.” Lovecraft’s writing was already decidedly old-fashioned when he wrote it in the early 1900s, let alone today.

His vocabulary is large and exotic, and he does the readers no favors in understanding his language. Furthermore, Lovecraft’s stories are very heavily expository – that is, they spend a lot of time with the narrator simply describing things outright.

The density of actual dialogue in his work is drastically lower than in most prose, and the oh-so-oft-quoted rule of “show, don’t tell” is flagrantly ignored. This is largely because his stories are almost always epistolary:

The story is meant to be the notes or journals or letters of the main character, and so exposition is about the only mode that really makes sense. In modern literary criticism especially, though, exposition is generally considered the weakest form of prose.

Furthermore, Lovecraft includes the supernatural and paranormal elements of his work as if the reader already has knowledge of those things. Despite the stories being mostly exposition, there is no time taken to explain the outlandish science fiction elements of his work, and names of people, supernatural figures, and esoteric books are thrown around freely as if these things were already in the popular conscious.

This is one of the ways Lovecraft makes even his wildest flights of fancy seem grounded in the real world, and how he and his compatriots built the mythos over time – these off-hand references became an internal mythology, such that it’s almost necessary to have already read all of the mythos material in order to properly understand the references being made in a given story. For fans, this is the best part; for critics, it’s a confusing rat’s nest of randomness.

The second reason that’s often cited is the implicit bigotry that permeates a significant portion of Lovecraft’s work. There’s no denying he had a pathological fear of “otherness” that fostered some very problematic views within him. While many people call him a racist, this isn’t really accurate; in truth, he was a vocal xenophobe.

There’s no denying that, like pretty much every author, Lovecraft produced some… questionable material alongside the gems. But hey, my favorite story of his is “The Rats in the Walls,” which is frequently decried as one of his most over-written stories, and includes a cat whose name is a racial slur. No one said Lovecraft’s work wasn’t complicated.

When Lovecraft was 5 years old he was given a cat with a racial epithet for a name. Being 5, it’s doubtful that he named it, but that it was named by his parents or other adult relatives.

He owned it until he was 14. He never owned another animal, but he did make friends with many strays, which he gave such names as “Little Sam Perkins” and “Old Man”.

He invented a fraternity for the strays to belong to, and filled his letters with the antics of the members of the Kappa Alpha Tau (Kompson Ailouron Taxis, or Company of Elegant Cats).

While there can be no question that HPL had racist beliefs, I don’t think the name of his childhood cat can be laid at his door, and he never called any other cat by an epithet name, though he did put the pet of his youth in two stories, THE CASE OF CHARLES DEXTER WARD and THE RATS IN THE WALLS.