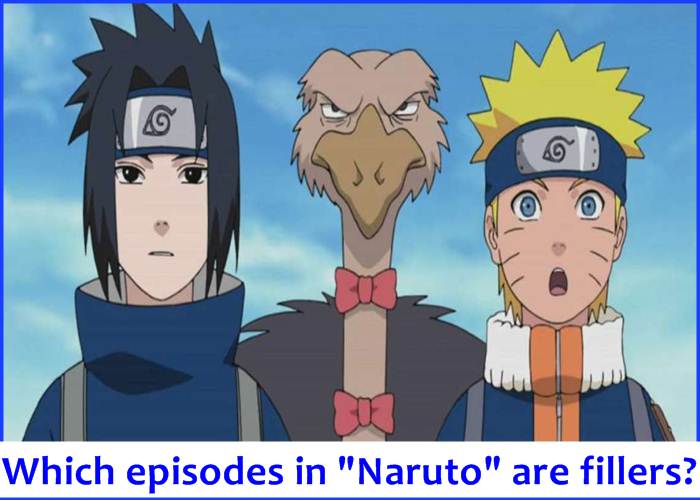 The story is told in two parts the first set in Naruto’s pre-teen years, and the second in his teens.

The series is based on two one-shot manga by Kishimoto: Karakuri (1995), which earned Kishimoto an honorable mention in Shueisha’s monthly Hop Step Award the following year, and Naruto (1997).

Most people will give you a copy of what they’ve seen in a site called “Anime Filler List”. It’s a great site, don’t get me wrong, but it gives a more detailed division of episodes rather than simply “filler” and “canon”. You see, AFL divides the episodes into four categories:

“Canon”, which are episodes 100% adapted from the manga.

“Mostly Canon”, which are mostly adapted from the manga. A small part of them may be filler material, but they’re still very essential.

“Mostly Filler” episodes are mostly anime-original, but I still wouldn’t skip them, since there could still be some vital scenes in them.

And so we are left with the “Filler” category, which is completely skippable if you don’t want to stray away from the main story. After looking at the Naruto list on AFL for a good hour or so, I have finally figured out the best way to watch the series. I am including “Mostly Fillers” here, because of the reasons stated above:

No, skip them. For both series. The problem with Shippuden later on becomes that they start to intermesh the canon story and the filler in the same episode, so it becomes nearly impossible to actually skip the filler unless you have time stamps to use as a guide for fast-forwarding through the non-canon parts.

If you want to give some of the filler a try AFTER you finish watching the series, then there are some that I did not find to be completely terrible. But very, very little.

And not worth slogging through it on a first watch.

9/10 times the filler is not worth watching, drags things out to insane and unnecessary lengths, all because the studio is so busy sucking up money that they don’t care anymore about adapting the freaking manga.

They didn’t even do the final chapter of the manga as part of Shippuden. Instead, AFTER the part where the series should have ended, they gave us an entire season of filler and then stuck the final chapter in as a SEPARATE MOVIE. One chapter. Turned into a movie. Just so that you’d have to buy it to see the end of the series.

That’s how bad this studio’s handling has been.

They were scraping the bottom of the barrel so hard that they were reusing filler from Naruto in Naruto Shippuden. Ninja ostriches. Stupidest idea ever. Oh, and ninja robots. That just exist. For some reason.

And at the most climactic and exciting parts, they interrupted the main story to pull us away into multiple story arcs composed entirely of filler. So much so that people had a hard time remembering what was even happening in the real story.

Nearly two years of filler, when the manga was already done. And then they STILL inserted filler episodes and filler story arcs and filler seasons after they were supposedly doing the actual canon story again.

I can’t care about the filler anymore.

Because none of it actually happened. It’s all meaningless, made-up, time-wasting, there to pad out the series for more money.

Once you’ve read the manga, if you still want to watch Shippuden, you’ll have a better idea of what belongs there, what doesn’t, and what to skip.

Which Naruto shippuden episodes are fillers?

A filler episode is what happens when nothing happens to the original plot of the canonical story line.

Naruto Shippuden has a lot of filler episodes in it and some episodes can actually be mostly filler and a little bit of the canonical plot.

Episode 7 Run, Kankuro is mostly filler. Thankfully the next filler isn’t until episode 57 all the way through to episode 71.

Episodes 90 all the way through episode 112 are all filler episodes. Then two episodes 127 and 128 with Tales of a Gutsy Ninja: Jiraiya Ninja Scroll Part 1 and Part 2.

Next is up to 144 all the way to 151 during Utakata and Hotaru Arc. Episodes 170 and 171 are both filler Big Adventure! The Quest for the Fourth Hokages Legacy Part 1 and Part 2.

Then there’s a huge batch of filler episodes from 176, mostly filler, all the way to 196 except for episode 179 Kakashi Hatake, the Jonin in Charge which is mostly canonical.

A lot of people like the filler episodes especially when they’re like Naruto and Hinata’s Wedding Arc. They just got a happy ending. They’re all great episodes in my opinion, I rewatch the entire series from start to finish.

For whoever asked this question I would say only one thing. don’t consider something like fillers. every episode is kind of awesome. Dont skip these fillers They are a lot of fun.

And for all remaining answers.. I would like to ask one thing… what do mean by filler… do you want only naruto, Sasuke etc characters in the anime or what… fillers play a great role for some character development..

See what all said…it covered almost all episodes of anime! (this is CRAZY!)

Every Episode is awesome… watch all for best fun!

What all listed out in their answers is purely waste… I recommend to watch all! No offence to anyone but this is fact!

Sorry if I hurt anyone’s feelings! Feel free in comments!