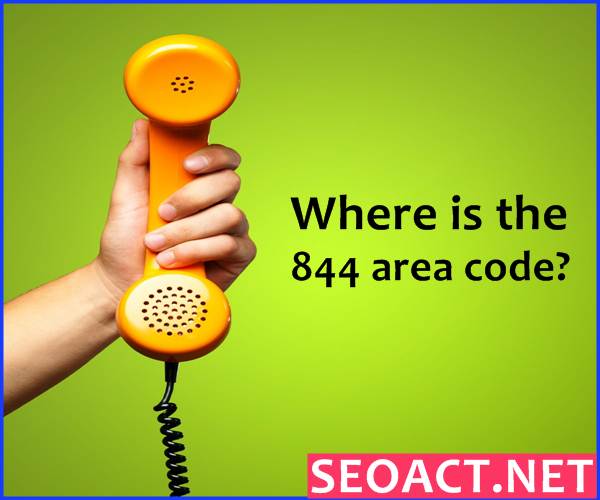 Telephone numbers are the addresses of participants in a telephone network, reachable by a system of destination code routing.

For public number systems, geographic location plays a role in the sequence of numbers assigned to each telephone subscriber.

Many numbering plans subdivide their territory of service into geographic regions designated by a prefix, often called an area code or city code, which is a set of digits forming the most-significant part of the dialing sequence to reach a telephone subscriber.

The 844 area code was put into service in December 2013. 800 numbers, known for being toll free for the caller, had simply run out of options. It became common to see 866 and 877 numbers that would provide the same service.

RELATD: What is area code 855 and how can I tell who is calling?

Currently, toll free area codes in the U.S. are 800, 833, 844, 855, 866, 877, and 888. These area codes have become commonplace and many people don’t question them as they were once linked to legitimate businesses, organizations, and government agencies.

If 800 numbers are the norm, what makes 844 so special? While it is offered to businesses for a fee, just like the other numbers, the percentage of scam calls using the area code is very high. Many reports detail calls from the number using scare tactics demanding return calls and/or personal information.

Currently, area code 844 is located in 20 North American countries, including the U.S. and affiliated territories, Canada and several Caribbean countries. It’s part of the North American Numbering Plan, an integrated telephone numbering system which allows area codes to be shared with participating countries.

Getting an 844 number is relatively easy. Legally, the person or business requesting the number must purchase and register it with a legitimate phone service. Illegally, a user can use VoIP services to mask their number using any prefix they like.

If you receive an unknown call with an 844 area code prefix, be cautioned. It may well be a legitimate phone call. Let the call go to voicemail. The message the person leaves (if any) will tip you off if it’s a scam. Some people have reported receiving calls regarding:

Before you return a call to a number in the 844 area code, use a reverse phone search to learn if the number is legitimate. If the call is an 844 area code scam, user your phone to block the number to cut down on the calls.

If the caller makes threats, report the information immediately to local law enforcement. You should also ask your phone company about spam blocking tools and do a search to find apps that you can download to your mobile device.

Go to fcc.gov/robocalls to receive information on available robocall blocking tools. You should register your number with the National Do Not Call Registry.

The Do Not Call Registry was created to stop sales calls from legitimate companies, so it may not stop calls from scammers. However, it could make it easier for you to spot the calls. It’s recommended that you report unwanted calls immediately and avoid answering calls from that number in the future.

Why do I keep getting calls from area code 844?

As has been noted, caller ID has been rendered moot, as a tool to avoid unwanted solicitations, by rogue phone providers.

Recently I started fighting back the only way I could think of: pretend to be interested and consume as much of their time as possible.

I made up a bogus credit card number to give him (written down for reference) and, first “attempt to pay” gave him only 15 digits. He informed me of this, so I read the whole number but transposed 2 of the digits.

He pointed out the discrepancy, so I made him wait for me to “look for my glasses.” Of course, after finally giving him the same 16 digit answer twice, that number failed.

He asked if I had another card to try, and I said, “you know it would be really helpful if you took me off your list and never called me again, could you do that for me, please?”

The dude was livid, “why would you waste my time like that,” he snarled through clenched teeth. “Right back at you man, sometimes you call me 3–4 times in a single day, what part of I’m not interested don’t you get?”

Then he became very unprofessional, using homophobic epithets and suggesting things that are anatomically impossible. I find that to be unconstructive, so I wished him a nice day and hung up… and then laughed my ass off for a good 30 minutes, it was MOST entertaining!

It has actually seemed to pan out, I’ve been receiving way fewer cold calls. People of the world, fight back, invest 15 minutes into your future peace and quiet, it’s productive, it works, and it’s entertaining!

844 telephone numbers are toll-free and can be registered fairly easily by individuals and organizations. While phone numbers with an 844 prefix can be used by legit customer support centers, they’re also heavily used by scammers to con their victims.

Anyone who has ever watched TV has probably heard some variant of the following phrase:

844 numbers are all over the place. Seemingly every radio, television, and internet advertisement has one. But why? Why are they in such common use by so many businesses?

For starters, 844 numbers are toll free, and have a national presence. Your customers can call (and text!) 844 numbers at no cost to the caller.

Below, we’ll get into the details of these benefits (and more!).

The 844 area code is a North America toll free number prefix. This includes the United States, Canada, Alaska, and countries in the Pacific and Caribbean. What is an 844 Number? An 844 number is a toll free phone number for North America.

844 is a toll free area code, just like 800. A prefix of 8 represents calls that are paid for by the recipient, rather than the caller. When people think of toll free calling, they usually think of 800 numbers, but there are many other options that function in the same way.

Yep! As long as your number is text enabled, customers can text your toll-free numbers and you can text back.

How can I use an 844 number for marketing?

Call-tracking, for one, is a great way of employing your 844 number for marketing purposes. When using offline campaigns (like ads in popularly viewed areas), get a separate 844 number for each, then track who is calling what number. That way you can see which campaigns are successful and which can be improved.

Choose “Settings,” then the “Call blocking” option. This is where you’ll add the numbers of callers you’d like to ignore. Simply tap the “Add number” or “Block list” option, and key in whatever the number is. You can also choose a contact here, assuming you’ve saved the number of the annoying caller.

Some Where, No Where, Every Where!!!

The difference is if you called the number directly that the 844 number is call forwarded to then YOU pay for the long distance charge that is associated to the number, But Companies early on did not want to burden customers with charges and elected to PAY FOR the costs to complete the call.

Hence TOLL FREE numbers were set aside for them.

Someone asked if they BUY a toll free number if that would stop robo or scam calls.

Nope, the 800 toll free numbers even the 900 toll number are re-director numbers to a real phone number, so you still need a regular phone number an THAT is the number that scams and robo calls are targeting.